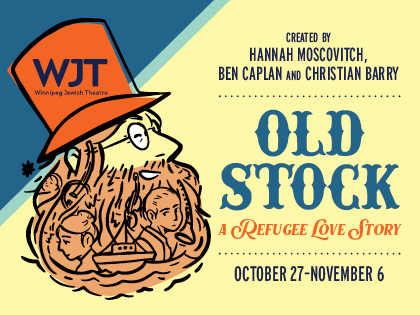 Ben Caplan released his first studio album in 2011, and has spent the last ten years recording music and performing in music clubs and theatres around the world. For the ten year anniversary of his first music release, Caplan has recorded a retrospective collection of stripped back re-interpretations of songs from across his catalogue. The album, entitled Recollection, will be released in October of 2021 followed by an extensive European and Canadian tour.

Eric is very excited to be a part of 2b theatre’s Old Stock. He is a graduate of the American Musical and Dramatic Academy where he studied theatre in NYC and LA. He has been a musician for as many years as he has been a performer, so this opportunity is an exciting one. Previous credits include: The Master and Margarita (Crow’s Theatre), Annie,Honk!, Snow White: the Panto, Peter Pan: the Panto (Drayton Entertainment), Key Change (Globe Theatre Regina), Hollywood Hits (Stage West Calgary). Huge thanks to the entire Old Stock team and as always, special thanks to family and friends for their constant support. This one is for Grandpa Da Costa.

Shaina is thrilled to be playing Chaya and telling the story of Jewish immigrants like her own great-grandparents. Since graduating with a BFA from the Acting Conservatory at York University and the Professional Theatre Program at Citadel Theatre/Banff Centre, Shaina has been working as an actor, singer, songwriter and writer. Favourite acting roles include: Charlotte (Charlotte: A Tri-Colour Play with Music – Theaturtle, European Tour); Juliet (Romeo & Juliet – Citadel Theatre); Toba (Chasse Galerie - Soulpepper/Storefront Theatre, MyTheatre Award Nomination Outstanding Performance/ Dora Award Best Ensemble). She is also the lead singer/songwriter for electro-pop band Ghost Caravan and previously led folk band Crooked House Road. You can find her music on all streaming platforms as well as on sale in the lobby. Upcoming she will be starring in new digital series Less Than Kosher (Filmcoop/ HighballTV) for which she also served as creator, showrunner and executive producer. For Josh, Emi, Mom and Dad. Instagram: @shainasb @ghostcaravan

Season Subscriptions are still available! Get yours today!