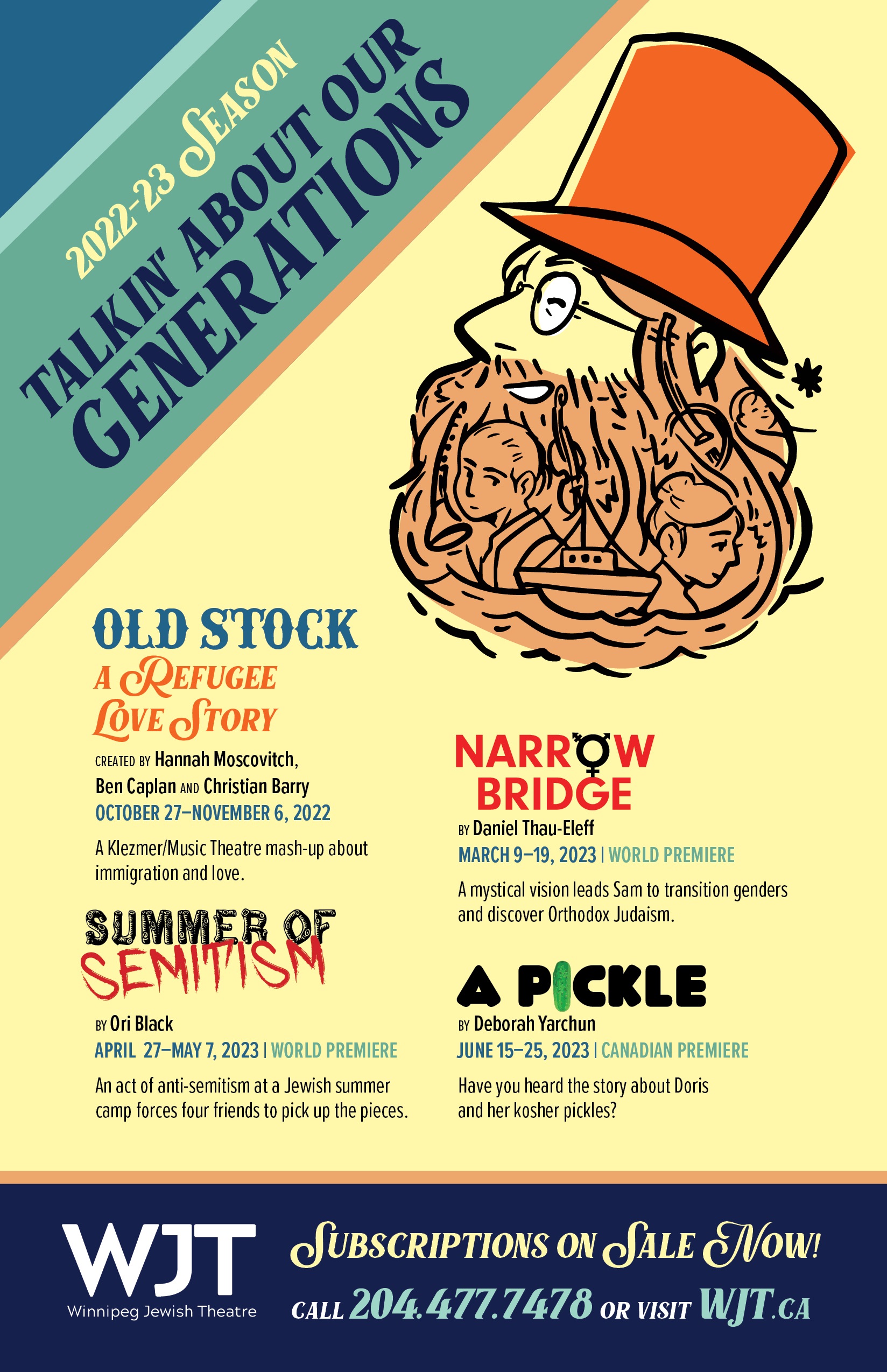 For our 35th anniversary, we will explore the essence of L’Dor V’Dor, a well-known (and well-loved) Hebrew phrase meaning “from generation to generation.”

Each play serves as a snapshot examining different generations of Jewish people and their specific circumstances. The vibrant and dynamic playbill balances current issues of Jewish identity with familiar nostalgic memories filled with humour, heart, and humanity.

This is our first 4-show season in fifteen years and will see us return to the Berney Theatre and our tent venue at the AJCC. Subscriptions are on sale now, with early-bird rates until July 31. So join us for a theatrical celebration of Jewish culture and the human spirit!

See you at the theatre,

IN THE BERNEY THEATRE:

A 2b Theatre Production (Halifax)

Old Stock: A Refugee Love Story is a humourously dark folktale woven together with a high-energy concert. This Klezmer music-theatre hybrid starring genre-bending sensation Ben Caplan is inspired by the true stories of two Jewish Romanian refugees coming to Canada in 1908. It’s about how to love after being broken by the horrors of war. It’s about refugees who get out before it’s too late, and those who get out after it’s too late. And it’s about looking into the eyes of God. Old Stock has played all over the world including NYC, Toronto, Montreal, Edmonton, Victoria, London, Edinburgh, and Sydney.

When Sam has a vision of drifting through the mechitzah (the barrier separating men and women in Orthodox synagogues) it launches a unique spiritual and religious journey. Sam/Sholem comes out, first as transgender and then as an Orthodox Jew. Struggling to balance family dynamics, history, activism and Talmud study, Sam wonders if, as Rabbi Nachman said, “All the world is a very narrow bridge.” Delayed by the pandemic, WJT is excited to finally share this world premiere by local playwright Daniel Thau-Eleff.

Summer of Semitism is a play about four friends who have grown up together going to Jewish summer camp. Now, in their early 20s, they’re taking on the responsibilities of Head Staff and are in charge of running their beloved home away from home. When an act of anti-semitism hits the camp hard on its first day, the friends are left to pick up the pieces before their campers arrive.

IN THE WJT TENT:

Early Bird subscriptions are on sale now. Go to https://www.wjt.ca/box-office/subscriptions for more information.