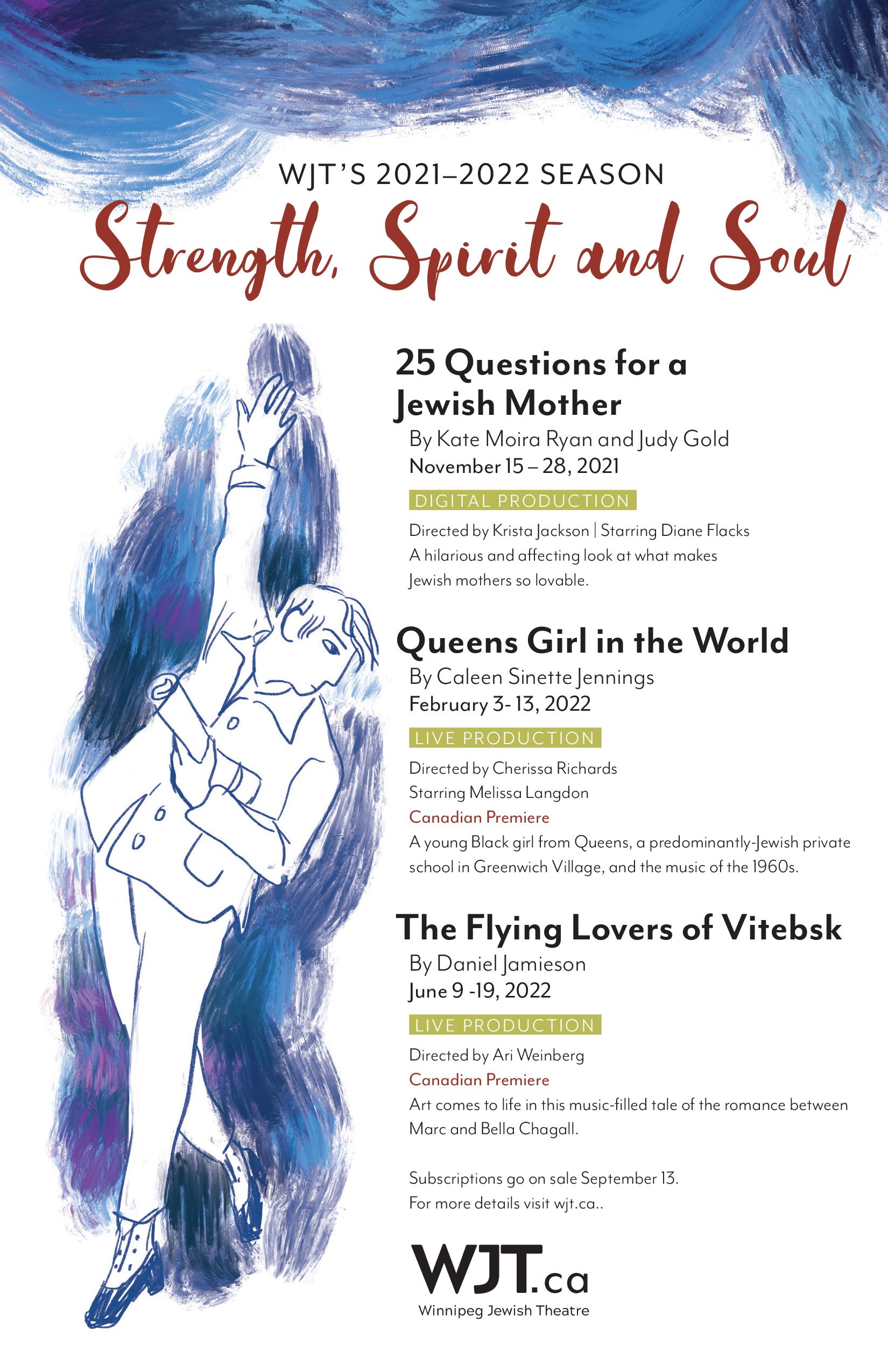 For our 34th season, WJT will produce a playbill that celebrates the vibrant joy and incredible strength of the human spirit through works that will nurture our souls. There is something for everyone! We will take audiences to NYC in the 1960s, into the tiny Russian town of Vitebsk, home of Marc and Bella Chagall, and into the hearts and minds of Jewish mothers everywhere. The season will come alive with one digital production, a return to the Berney Theatre, and an in-the-round production in a tent at the AJCC. Come laugh, smile, cheer and celebrate with us!

25 Questions for a Jewish Mother

Queens Girl in the World

Queens Girl in the World chronicles the misadventures of bright-eyed, brown-skinned Jacqueline Marie Butler, whose sudden transfer from a protective, middle-class late-1950s upbringing in Queens to a progressive, predominantly-Jewish private school in Greenwich Village, adds comical confusion to her already quizzical, fish-out-of-water adolescence. Lively and poignant—and punctuated with the irresistible sound of Motown—Queens Girl in the World tags along for a young woman’s journey of self-discovery, at the onset of Civil Rights-era social change.

The Flying Lovers Of Vitebsk

Perhaps you’ve seen them floating over a Russian village? Partners in life and on canvas, Marc and Bella are immortalized as the picture of romance. But whilst on canvas they flew, in life they walked through some of the most devastating times in history. The Flying Lovers of Vitebsk traces this young couple as they navigate the Pogroms, the Russian Revolution, and each other. Their world comes to lie through a rich theatricality as fluid as Chagall’s paintings and woven throughout with music and dance inspired by Russian Jewish tradition.

SUBSCRIPTIONS ARE ON SALE NOW

This season WJT has two subscriptions to offer, the Preview and the Regular subscriptions. Both subscriptions grant access to all three productions planned for our 2021/2022 season at a discounted rate.

Due to fluctuating public health restrictions regarding indoor capacity limits, WJT will be assigning seating to patrons in early 2022. Assigned seating will be arranged with customers in order of ticket purchase date.

Our most popular subscription is back! This package grants you 48-hour admission to our online production of 25 Questions for a Jewish Mother which you can redeem any time between November 15-28 as well as admission to any 1 regular performance (excluding Preview Night) of Queens Girl in The World and The Flying Lovers of Vitebsk each, all at a discounted price of $95.00*
‍

The Preview subscription grants you 48-hour admission to our digital production of 25 Questions for a Jewish Mother which you can redeem any time between November 15th -28th as well as the Preview performances of Queens Girl in The World and The Flying Lovers of Vitebsk at a discounted price of $85.00*

Our most affordable package grants you admission to Preview Night of Queens Girl in The World and The Flying Lovers of Vitebsk at a discounted price of $67.00*

‍
*plus tax and fees